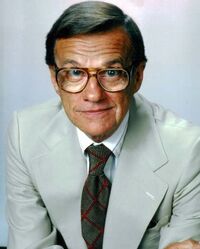 William Lawrence Francis "Bill" Cullen (b. February 18, 1920 - d. July 7, 1990) was an American radio and television personality whose career spanned five decades. He was best known for his long-standing career in television game shows.

Cullen was born in Pittsburgh, Pennsylvania, the only child of William and Lillian Cullen. He survived a childhood bout with polio that left him with significant physical limitations that he never fully overcame. He also wore eye-glasses with very thick lenses, which became a trademark.

Cullen contracted poliomyelitis when he was eighteen months old, as stated above. The long-range after-effects of that illness, aggravated by injuries he sustained in a serious motor vehicle accident in 1937 and which required a nine-month hospitalization, left him with significant and lifelong ambulatory limitations.

Cullen's career began in Pittsburgh, where he worked at WWSW radio. He assisted sportscaster Joe Tucker, who called Pittsburgh Steelers NFL pro-football games. Cullen there became well known for his puckish sense of humor and for playing pranks on his fellow announcers while they were on the air. Cullen decided to try his luck in New York and shortly after arriving there, one of his first jobs was writing for the Easy Aces radio show.

After making New York City his new home, Cullen continued hosting several radio programs and his career in the Game Show World began to take off. His very first TV game show was Winner Take All, produced by Mark Goodson and Bill Todman, which began a life-long association he had with the duo. It aired on CBS in 1952. Then from 1954 to 1955, he hosted NBC's Place the Face, a program in which celebrities identify persons from their past.

Cullen hosted several game shows throughout his career. These included the original version of The Price is Right, the syndicated version of The $25,000 Pyramid, Child's Play, and Blockbusters. He also appeared as a frequent panelist on shows like To Tell The Truth and I've Got A Secret, both of which Goodson and Todman produced.

Cullen's greatest game-show hosting work began in 1956 when he hosted the original version of The Price is Right, another Goodson-Todman production. Cullen hosted both the daytime and the syndicated versions of the show for nine full seasons until it was canceled in 1965. During these years, there were some "gag" prizes offered, the "auctions" allowed multiple bids that could go over the actual retail prices of the prizes(though such bids always lost), and the show had returning champions at that time.

In addition to his many game-show hosting credits, Cullen also served as a frequent panelist on other game shows beginning with I've Got A Secret, from 1952 to 1967, and then To Tell The Truth, from 1969 to 1978; there, he would also occasionally serve as a guest host.

While he was in the running to host the 1972 revamped version of The Price is Right for CBS, the physical demands of the new format were considered too strenuous for Cullen. The job was instead split between Bob Barker and Dennis James. Barker hosted the daytime version while James handled the syndicated version until 1977 when Barker took over the hosting reigns of the nighttime version (until 1980) as well as the daytime version, which he hosted until his retirement in 2007.

Cullen continued to appear as a celebrity panelist on several other game shows, such as Password and its revival Password Plus, Match Game, and all pre-$100,000 versions of Pyramid. Cullen also hosted several pilots for his close friend, quiz producer Bob Stewart, who had created Price, Truth, and Password for Goodson-Todman and Pyramid for his own company. He thus became the only person to host each of these formats on a full- or part-time basis. He also appeared as a panelist on several game shows hosted by his favorite understudy, Bob Eubanks, including Trivia Trap, Rhyme and Reason, and All-Star Secrets as well as making guest appearances with Eubanks on Family Feud. He was also a close friend of Canadian-American host Jim Perry, who also appeared on Family Feud alongside Cullen and Eubanks, and later hosted Card Sharks.

Cullen's game-show hosting career continued into the 1980s. First, he guest-hosted Password Plus for four weeks after illness forced original host Allen Ludden to withdraw. (Ludden died on June 9, 1981.) Future syndicated Price host Tom Kennedy then took over until this version ended in 1982. Cullen then hosted Blockbusters on NBC from October 24, 1980, to April 23, 1982. Later that year in October, Cullen made his only appearance on Barker's version of The Price is Right. The purpose of his visit was to promote his newest game show, Child's Play, on CBS. The children-based game show was already on the air, as it had premiered on September 20, 1982. By the time it was canceled on September 16, 1983, it had become his very last game show for both CBS and Mark Goodson after 30 years association as an emcee.

In 1984, Cullen took over hosting duties for the game show The Joker's Wild after previous host and joint creator Jack Barry had died from cardiac arrest. Cullen hosted the program until its cancellation in 1986.

In all, Cullen hosted 23 different game shows over the years, more than any other person in television history. These shows included Eye Guess in the 1960s, Three on a Match and the nighttime version of $25,000 Pyramid in the 1970s; and Chain Reaction Blockbusters, Child's Play, Hot Potato, and The Joker's Wild (after Jack Barry's death) in the 1980s.

Cullen was married three times, but he had no children. His first marriage was a brief one while he was still living in Pittsburgh. His second marriage was to singer Carol Ames; this lasted from 1949 to 1955. On December 24, 1955, Cullen married former dancer and model Ann Roemheld Macomber, daughter of composer Heinz Roemheld; this marriage would last until his death. Ann often appeared with Cullen on Tattletales in the 1970s and 1980s.

Cullen was a heavy cigarette smoker for most of his life, and he contracted lung cancer from this habit. He died of that disease on July 7, 1990, in Los Angeles. He was 70 years of age at the time of his death.

Cullen was initially in the running to host the 1972 version but the physical demands of the new format were deemed too strenuous for him.
The Game Show Congress, a non-profit association that seeks to promote the game show industry, annually presents the Bill Cullen Career Achievement Award to performers who have had distinguished careers in the genre. The first award in 2004 was given posthumously to Cullen himself; his widow Ann accepted it on his behalf.

From 1982, Bill Cullen visits "The Price is Right" as he promotes "Child's Play" on CBS

Retrieved from "https://priceisright.fandom.com/wiki/Bill_Cullen?oldid=83671"
Community content is available under CC-BY-SA unless otherwise noted.