May 16, 2007 (#3993K)
Bonus Game is a game where a contestant plays for five prizes; four of which are small prizes and the fifth is a bonus prize, hence the name.

Appearances outside of The Price is Right[edit | edit source]

Bob Barker was a guest several times on The Rosie O'Donnell Show and his appearances almost always featured a pricing game from The Price is Right in which Rosie would play the game on behalf of an audience member (or played with the audience member as a team), with the audience member winning the prizes. The episode in which Bonus Game was played was featured in a 1999 episode. In it, the audience player admitted that she lived in the city and didn't have a patio, so she had no possible use for the bonus prize, a barbecue grill, and patio furniture. When she asked to trade the prize in, Bob remarked, "No; here we do it just the way we do it on The Price is Right. That's the prize; take it or leave it!". Just like the current Carey version, it featured a male model posing for the grill instead of a female model. 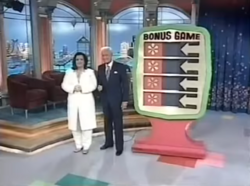 Rosie and the audience player won 3 of the 4 smaller prizes on offer and won the bonus as well (the word "BONUS" was in the bottom window).

Retrieved from "https://priceisright.fandom.com/wiki/Bonus_Game?oldid=128042"
Community content is available under CC-BY-SA unless otherwise noted.