The Price Is Right Wiki
Register
Don't have an account?
Sign In
Advertisement
in: Pricing Games, Active Games, 2-Prize Games,
and 39 more

June 14, 2007 (#4034K)
Clock Game is a game where the contestant races against the clock to win two prizes, and an additional bonus prize.

The best way for contestants to win the game is to give a bid in $100 increments (eg: five hundred, six hundred, seven hundred, eight hundred, etc.) Then the contestant would give a bid in between $700-$800 for example and go for seven-fifty. Then, they'll try adding or subtracting $10 depending on what the host tells the contestant. The contestant is allowed to take shortcuts in pronunciation to save time. One common example many contestants did would be counting by tens and then count by ones which would be 991, 92, 93, 94, 95, 96, 97, 98, 99. Another example that some contestants did would be saying the numbers in the one's column only which would be 991, 2, 3, 4, 5, 6, 7, 8, 9. This logical strategy for the game is a binary search strategy, which makes the game fairly easy to win, however trying to do the math in one's head might be more time consuming than following the above strategy.

Appearances Outside The Price is Right[]

An appearance of Clock Game appeared in a 1998 episode of the syndicated daytime talk show The Rosie O'Donnell Show after an interview with then-host Bob Barker where studio audience members were the contestants but like the current Carey era, this only featured male models instead of female models showing the prizes. 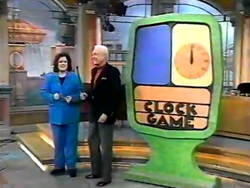