The Price Is Right Wiki
Register
Don't have an account?
Sign In
Advertisement
in: The Set, Areas, Strategy Pricing Games,
and 2 more

Contestant's Row (Now mostly known as "Bidder's Row" in the Drew Carey era) is the area at the foot of the stage where four contestants play the "One Bid" round for the opportunity to proceed to the stage to play a pricing game. Now, due to the rising numbers of COVID-19 cases, contestant's row has been modified and the podiums are on the stage spaced 6 feet apart from each other. Also, when a contestant plays a pricing game, the contestant, Drew and the game itself are all spaced out accordingly. The contestant is allowed to express his/her emotions, but no physical contact can take place due to the threat of COVID-19. Starting late 2021, audience members were allowed back into the studio. Still following COVID-19 guidelines from last season, The "One Bid" monitors were spaced out. Host and Contestants are still 6-feet away from contact. 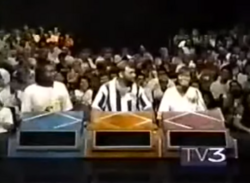 The original Contestant's Row podiums from 1972: Note the Goodson-Todman asterisk that indicates the winning bid. The covers for the chairs read the show's name at the time, which was "New Price Is Right" (lacking the "The"). Numbers are displayed in the Eggcrate font.

Contestant's Row from 1975: Shortly before the show debuted to one hour, the seat covers were changed to blue and have been updated to reflect the show's current name. Notice the second podium is green and the fourth podium is blue.

The Contestant's Row frame border colors turned red for a brief period in the 1980s. The seat covers have changed to green and stayed that way until 2007 when Drew Carey took over. The second and fourth podiums switch colors and have continued to use the same colors today.

Contestant's Row from 1993: The display borders have been changed back to the standard green in 1985 and would remain this way for many years.

Contestant's Row from 1997: Two different curtains were used such as this....

Contestant's Row from 2001. People guess the price of the prize.

From 2006: Along with the orange podium now being yellow, silver borders were added to the displays.

From October 2007: Notice that the red display was brighter. Starting with this season, the show's name has been removed and now the covers are blue with Pricedown dollar signs.

The revamped displays from December 2009: The podiums have been darkened again.

In the 44th season premiere, the show went back to its early roots and had its displays be like the ones in 1972-1975, complete with Goodson-Todman asterisk.

The Contestant's Row podiums for Big Money Week 2015. The bids are not only centered, but also include dollar signs and commas, similar to that of the Showcase podiums.

From the Amazing Race Primetime Special

The new contestant's row podiums from the 45th season premiere

The contestant's row podiums from the Thanksgiving episode.

The contestant's row podiums with Christmas bows from Christmas Week 2016.

From the 2018 Summer Beach Party episode.

The new Contestants' Row podiums with the Price Dollar Sign at the Bottom, as there were no audiences allowed, and the contestants must stay 6 feet apart and maintain social distancing during the COVID-19 pandemic.

This is The Money Game Season 14 version of Season 50