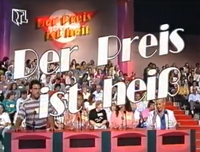 Der Preis ist heiß (The Price is Hot) was a German game show that originally ran on RTL from 1989 to mid 1997. It began as a weekday afternoon program at 5:00 PM, before becoming a mid-morning show at 10:30 AM (11 AM during its final episodes) in late 1992. It was an adaptation of the American show, The Price is Right.

In it's 8-year run, the show produced and aired a total of 1873 episodes on RTL primarily on weekdays with occasional editions on the weekends. The host was Dutch presenter Harry Wijnvoord, with the Priesankundiger ("Price Announcer") in the background (with a few exceptions during product description) being Walter Freiwald. After being off the air for about 20 years, the show returned on cable channel RTLplus (now RTLup) on October 9, 2017 and was this time hosted by Wolfram Kons with Thornsten Schorn as the new Priesankundiger ("Price Announcer"), it was canceled again after a single season in 2018.

After its four year absence, in 2022 the show returned to its original channel RTL with the return of its original host Harry Wijnvoord but with Thornsten Schorn from the 2017 version as Preisankundiger ("Price Announcer") instead of the late Walter Freiwald. It premiered on May 4, 2022 and consisted of only three episodes with the other two scheduled for June 8 and the pre-Christmas period.

The program consisted of three rounds.

After the prize-games heralded Der Rad or "The Wheel" (Showcase Showdown) the last round, which was always announced by Freiwald in a serious tone with the words Meine Damen und Herren ... Der Rad! ("Ladies and gentlemen ... the wheel!"). The winners of the prize games had to turn a wheel of fortune, the two candidates who are doing erdrehten (or "turned") the highest point value, came into the finals and played for the sonderangebot (or "special offer"). This consisted of numerous individual products whose total price had to estimate the candidate as in the preliminary round as accurately as possible. Here, too, led a outbidding unable to survive. The total value of the sonderangebot (or "special offer") article was moving normally around DM100,000 (€50,000), but could in rare cases even exceed DM200,000 (€100,000).

In total, there have been at least 40 different pricing games around here.

Legal dispute over the parodic use of broadcast excerpts[]

In a copyright case against the broadcasting of a - blended with original video clips - Parody on the mission of the presented federal court on 13 April 2000 found that the applicant no claims from the account of the use of excerpts from the TV show copyright on injunctive and damages to stand. The 26 April 1994 episode of the show sent competed in a game scene a bladder tonic. In Kalkofes Mattscheibe (Lime Oven Ground Glass) this scene was the opinion of the court "in grossly satirical [r], subjective unilateral [r] and wanted disparaging [r] way" played. This approach to use original ausschnitte (or "cut-outs") to Die ganze show, ist der preis recht, mit bissigem sarkasmus zu uberziehen ("the whole show, The Price is Right 'to coat with biting sarcasm"), but according to BGH by the freedom of broadcasting covered.

The concept was together with Studio Design and cult sayings in the ProSieben - Game Show Gameshow Marathon taken for a sequence. Harry Wijnvoord had at the beginning of the program a short guest appearance.

From 1982 until 1983, it sent the ZDF one installment quiz titled Das Geld Liegt auf der Straße (The money is on the Street) with presenter Christian Simon. It was produced only an episode, which in one of Hans Rosenthal was led series of test broadcasts of various television quizzes.

Before becoming the announcer for the 2017 and 2022 versions respectively, Thorsten Schorn was responsible for the warm-up of the studio audience in 1997 at the instigation of the late Walter Freidwald.

In 2019, it was announced that the original prisankundiger ("price announcer") for DPIH Walter Freidwald[1]passed away at the age of 65 due to a terminal cancer that he was suffering from.

On January 15, 2007, a version of the show has aired as part of Der Gameshow-Marathon (The Gameshow Marathon) on ProSieben hosted by Oliver Pocher and Oliver Petszokat. The winner of that episode was Sonya Kraus.

In the summer of 2009, speculation about a resumption of production of the consignment were loud, which was supposed to take place in 2010. The production company Grundy Light Entertainment set clear, however, that for the format no pilot episode was planned and it still would be no station would buy a new edition. It is usual to work in the background in various formats, but there were no concrete plans. On 31 May 2010 launched Harry Wijnvoord the petition Holen Sie sich den Pries ist zuruck! ("Get The Price is back!"). Wijnvoord called on all fans to support a comeback of his cult show by signing the petition to the German TV station, and optionally promotes other signatories. However, the action was unsuccessful and the associated website has now ceased.

On October 9, 2017, a new version of the show aired on RTLplus and was this time moderated by Wolfram Kons and Thorsten Schorn as the new Prisankundiger ("Price Announcer"). This version has been discontinued in 2018 after a single season. Since September 15, 2021 RTLplus has now been rebranded as RTLup.

After a four year absence, on January 30, 2022, it was announced that a new version of the show will air this spring on its original channel RTL consisting of only three episodes in total, with original host Winjnvoord being expected to return as host for this version along with Thorsten Schorn from the shorter-lived 2017 version returning as Preisankundiger ("Price Announcer") for this version. it premiered on 4 May while the other two episodes are being expected to air on June 8 and the pre-Christmas period.