Model
Dian Parkinson (born Dianna Lynn Batts on November 30, 1944 in Jacksonville, North Carolina) is a former American model. She is best known for being one of the longest-serving Barker's Beauties on The Price is Right (18 years) 1975-1993.

Hailing from Jacksonville, North Carolina. A Marine brat who soon made new residence in Virginia with her Military family. Dian was raised in a strict religious household which she soon chafed against as she turned to beauty pageants to help her escape her highly regimented lifestyle. In 1965, at age 21 while living in Falls Church, Virginia, she won the Miss District of Columbia USA title and competed as Diana Batts in the Miss USA 1965 pageant, where she placed fourth runner-up. Parkinson won the 1965 Miss World USA contest. She went on to represent the United States in the international Miss World contest, and was first runner-up to Lesley Langley of the United Kingdom. Dian traveled during 1965 with the Bob Hope USO Show including performances in Vietnam during late December 1965 and also served as Queen of the 1965 Bob Hope Desert Classic golf tournament. In the early 1970s, Dian began to land small roles in TV and movies as well as appearing on covers of various magazines including Cosmo.

Dian first entered the doorways of The Price is Right in mid-April 1975, in the spring substituting for Anitra Ford for three shows (Bob Barker had first introduced her as Diana Parkinson). She would return to the show as a long-term substitute model later that August when Anitra took a leave of absence from the show until mid-October and it during this time period that Dian wore a brunette wig as an attempt to look like Anitra during her absence. In September, the show experimented with a hour-long trial run for one week and it was during this week of shows that Dian & Janice Pennington were joined by a third model named Barbara, who only appeared for that one week.

Two months later (in November), the show (after receiving positive feedback from the hour-long trial run back in September) expands to the hour-long format permanently, Dian ditched the brunette wig (revealing her natural blonde hair) as she officially joined The Price is Right family as the third Barker's Beauty alongside Anitra and Janice.

In August 1980 (on the 28th), Dian was absent from The Price is Right for at least one episode (possibly more) as she was working on another television show (most likely Vega$) and for these shows, she was temporarily replaced by a (blonde) model named Lisa (she is believed to be Lisa Parkes, one of the models from the television game show Beat the Clock).

During her time (most notably throughout the 1980s) on The Price is Right, Dian was known for her voluptuous and sexy figure, especially when it came to her appearing in bathing suits, which always thrilled audiences, dubbing her the nickname "the Bikini-Clad Vixen". She was also known for her playful and often flirtatious behavior with the show's announcers Johnny Olson and (more so) Rod Roddy. When Olson was announcer and whenever he was shown on-camera, Dian occasionally was seen caressing his cheeks and when Roddy took over, during his on-camera time, Dian would often come over and playfully flirt and cuddle with him, causing him to blush.

Also, Dian would often playfully flirt with Bob Barker, teasing him and by the late 1980s (1989), their constant flirting led to a personal and romantic relationship outside of the workplace, which ultimately cost both of them very dearly.

In addition to her Playboy pictorials, Dian also appeared in a feature newsstand publication entitled Playboy presents Dian Parkinson and starred in her own Celebrity Centerfold video.

After 18 years as one of Barker's Beauties on The Price is Right, Dian decided to leave the series as her final appearance aired on June 18, 1993 (taped on June 7th, which was also the final episode of the then-21st season). Before the 6th pricing game (Dice Game), host Bob Barker gave her the opportunity to say a heartfelt goodbye to the home and studio audiences and mentioned that she was moving on to "pursue other interests" from the game show.

At the time of Dian's departure, there were rumors, particularly in the tabloids, that she had left the show because of an escalating and on-going nasty feud with Pennington and although it was reported that they quarreled (production staff seldom paired them together by the early 1990s), it was not the primary reason she departed the show. The following year, Parkinson was out for revenge as she filed a lawsuit in Los Angeles Superior Court (case no. BC106366) against Bob Barker for sexual harassment, claiming she was forced into a three-year sexual relationship with Barker in order to keep her modeling job on The Price is Right.

This prompted Barker to seek revenge of his own, as he and his attorney, Jeffrey Berman, held a live news conference where he revealed that he and Dian were indeed involved in a personal relationship outside of Studio 33 but stated that he had never forced her into doing anything that she had not wanted to do, sexually or otherwise. During the news conference, Barker recalled an angry and bitter shouting match between himself and Parkinson in his dressing room. He learned that she gave an interview to USA Today about her appearances in Playboy magazine as they asked her on what Barker thought about her posing nude in the popular men's magazine, in which Dian replied that Barker had (allegedly) said, "As far as I'm concerned, the good definitely outweighs the bad". Bob also revealed that he tried to reason with Parkinson and wished that she would not put words in his mouth, to which Parkinson then asked him on what he really thought of her nude pictorials, to which Barker replied that he thought they were unfortunate and revealed that Dian went ballistic and flew into an angry rage.

Holly Hallstrom also recalls this incident on The E! True Hollywood Story for The Price is Right in early 2002, where she said quote: "He called Dian into his dressing room and they had a HUGE screaming fight. He was denying that he ever had anything to do with her posing nude for Playboy and she was saying "But, Bob, you're the one who said Oh, Yes, I think U should do it and you're the one who called Mark (Goodson) and said "Let her do it" and Bob was saying "Oh, no no no, you're crazy, you're lying".

Bob ended the news conference by announcing that he was coming for Parkinson, saying that he planned to prove that her allegations were false as well as suing her for malicious prosecution.

Parkinson's sexual harassment case never went before a jury. In April 1995, Dian suddenly dropped the lawsuit after her doctor demanded that she do so because the ongoing stress was causing her health to decline dramatically (Dian was also frequently absent from The Price is Right between late April and May 1993 due to stress of the constant feuding between herself and Janice and her health problems, notably suffering from a bleeding ulcer).

Shortly afterwards in an interview, Barker stated that he felt that the dismissal of Parkinson's lawsuit was total vindication for him but the legal wars were just heating up and about to get even uglier as longtime model Holly Hallstrom found herself in the unemployment line after refusing to get involved in the Barker vs Parkinson battle. After her abrupt termination in the fall of 1995, Hallstrom stated in her press conference that Barker wanted her to recall certain events differently then she had called them as well as make appearances on talk shows and conduct radio interviews and was dismissed after her refusal to do so. (Holly's final appearance on The Price is Right aired on October 27, 1995).

After she dropped her lawsuit, Dian dropped from public view as her reputation & image in the public eye were irreversibly tarnished as she became a recluse over the next several years, neither being seen nor heard from. At one point (according to Kathleen Bradley in her book Backstage at The Price is Right: Memoirs of a Barker Beauty) she was rumored to be residing in San Fernando Valley, California.

However, Dian recently resurfaced come November 2019 as an article was published stating that she was moving out of her home in Westlake Village, California, putting it up for sale for $3.125M.

Dian appeared in an episode of The Mary Tyler Moore Show titled "Ted's Moment of Glory" (first aired on October 11, 1975) where she played a model named Ginger. She has also appeared on several episodes of Vega$ between 1979 and 1980.

In 1987, she appeared with Bob Barker and Janice Pennington on The New Hollywood Squares with host John Davidson (Dian & Janice shared a square while Barker had his own square). She and Janice have appeared on the series again without Barker. In 1991, she appeared with the cast of The Price is Right with Bob Barker as team captain on Family Feud (hosted by Ray Combs) as they faced off against the cast of The Young and The Restless with future TNPiR Host Doug Davidson serving as their team captain (The Price cast faced off against the cast of Y&R again in 1993 after Parkinson was no longer on the show).

In 1992, Dian appeared on The Maury Povich Show as she discussed her Playboy pictorials. The following year, before her departure from Price, she appears with fellow models Kathleen Bradley and Holly Hallstrom on Vicki Lawrence's talk show Vicki! alongside original Let's Make a Deal model Carol Merrill, $ale of The Century hostess & former Miss USA Summer Bartholomew, and Susan Stafford, the original hostess/letter-turner on Wheel of Fortune.

Also In the same year, she was featured in an infomercial for the workout exercise machine called EZ Krunch. 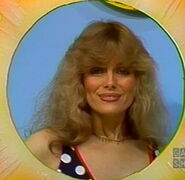 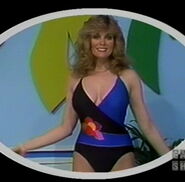 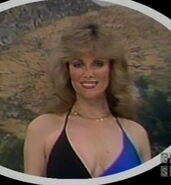 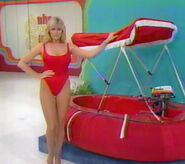 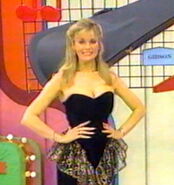 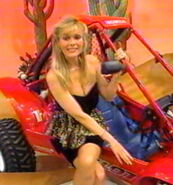 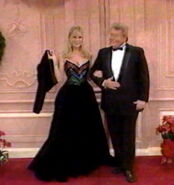 Dian with announcer Rod Roddy in a tuxedo 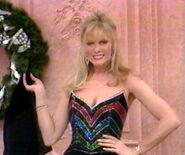 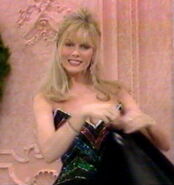 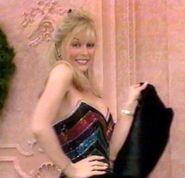 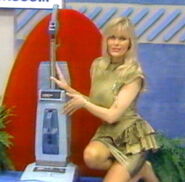 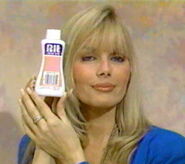 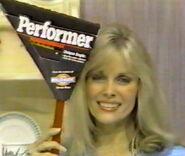 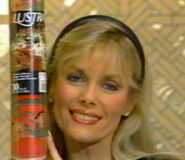 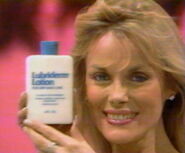 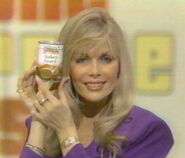 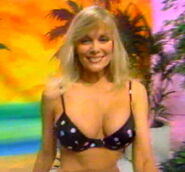 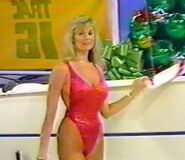 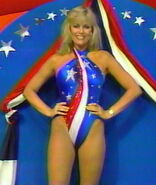 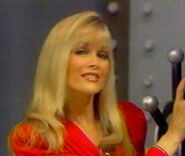 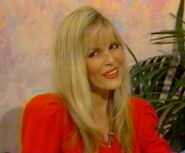 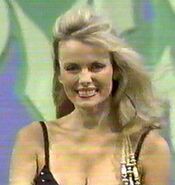 a portrait of Dian Parkinson, hand drawn by a fan
Add a photo to this gallery

Retrieved from "https://priceisright.fandom.com/wiki/Dian_Parkinson?oldid=156949"
Community content is available under CC-BY-SA unless otherwise noted.