The Price Is Right Wiki
Register
Don't have an account?
Sign In
Advertisement
in: Announcers, People, Deceased,
and 2 more

Announcer
John "Johnny" Olson (b. May 22, 1910 - d. October 12, 1985) was an American radio and television announcer. He was the announcer for over 32 Goodson-Todman game shows, including The Match Game, To Tell The Truth, Tattletales, Card Sharks, and Double Dare. But he was mostly notable for his service as the announcer on the revival of The Price is Right from 1972 (series premiere) to 1985 (his death).

Olson was born on May 22, 1910, in Windom, Minnesota. He landed jobs at WIBA and KGDA in nearby Madison, Wisconsin. Olson also enrolled in Pharmacy classes at the University of Minnesota and worked a string of odd jobs ranging from a soda jerk to a singer.

Olson landed his first network job in New York City in 1944, where he announced for the musical game show Ladies Be Seated, a stunt game among the lines of Truth or Consequences broadcast of the NBC Blue radio network.

His first TV announcing job came in 1958, he was the announcer of the final season of the original Name That Tune. He was also the announcer of Play Your Hunch, hosted by Merv Griffin until 1963 when his long association with Mark Goodson-Bill Todman Productions began. He announced for To Tell the Truth (1960), What's My Line? (1961), and The Match Game (1962-1969). He also announced an unsold pilot for the original prototype to He Said, She Said as of which was then later was a prototype itself to Tattletales called It Had to Be You hosted by the late Ed McMahon in 1966.

The Price is Right[]

Olson's announcing would rise to even greater heights beginning on September 4, 1972, when the revival of The Price is Right premiered. In addition to serving as sidekick to then-host Bob Barker, Olson was a beloved and valued member of the cast. He warmed up the studio audiences before each taping, he often had on-camera exposure (occasionally bantering with Barker) before calling out contestants' names, and he appeared in various showcases sketches portraying various characters.

In addition to announcing for The Price is Right, Olson also served as a full-time announcer for the revival of Match Game from 1973-1982.

Olson died on October 12, 1985, in Santa Monica, California, at the age of 75, just six days after he had suffered a cerebral hemorrhage. The production crew of The Price is Right learned of his condition as Studio 33 was being prepared for another day of taping. Production was canceled for the rest of that week (shows were recorded several weeks in advance of broadcast). No on-air mention of Olson's death was made until October 15, when Bob Barker paid an emotional tribute to Olson in an attached segment that followed the end credits. The final Olson-announced episode aired on November 8, 1985. He was entombed at Rosewood Cemetery in Lewisburg, West Virginia.

"Since taping this program, we've lost our good friend Johnny Olson. You'll continue to see and hear Johnny on the many programs he's already taped, he was dearly loved by all of us and he'll be sorely missed". - Bob Barker (1985) 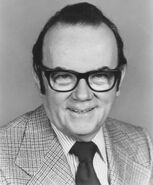