The Price Is Right Wiki
Register
Don't have an account?
Sign In
Advertisement
in: Producers, People, Deceased

Mark Goodson was born in Sacramento, California on January 14, 1915. His parents, Abraham Ellis and Fannie Goodson, emigrated from Russia in the early 1900s. As a child, Goodson acted in the amateur theater with the Plaza Stock Company. The family later moved to Hayward, California. Originally intending to become a lawyer, Goodson attended the University of California, Berkeley. He financed his education through scholarships and by working at the Lincoln Fish Market. He graduated Phi Beta Kappa in 1937 with a degree in Economics. That year, he began his broadcasting career in San Francisco, working as a disc jockey at station KJBS. In 1939 he joined radio station KFRC, where he produced and hosted a radio quiz called "Pop the Question" in which contestants selected questions by throwing darts at multi-colored balloons.

In 1941, Goodson married his first wife, Bluma Neveleff, and moved to New York City, where he teamed up with partner Bill Todman. The pair's first radio show, Winner Take All, premiered on CBS in 1946. Outside of television production, Goodson and Todman went on to own several newspapers in New England as well as radio station KOL in Seattle, Washington. Bill Todman died in 1979, and in the early 1980s, the Goodson's acquired the Todman heirs' portion of the company.

Although Goodson is closely associated with The Price is Right, he didn't create the original show, Bob Stewart did. After the original's cancellation in 1965, Goodson & his partner Bill Todman recreated the show in 1972 with an all-new format with elements of the original. Stewart also created the original Password and To Tell the Truth for Goodson as well. Stewart passed away on May 4, 2012.

Goodson died of pancreatic cancer on December 18, 1992, in New York City. After his death, Bob Barker gave him a small tribute which aired after an episode of The Price Is Right. He is interred at Hillside Memorial Park in Culver City, California, where the inscription on his gravestone is designed to resemble the Goodson-Todman/Mark Goodson (Television) Productions logo.

"This is a very sad time for the Price Is Right family. We've lost Mr. Mark Goodson, the creator of our show. Mr. Goodson, a legendary figure in television, was respected throughout the industry, and we shall miss his guidance in the years to come". - Bob Barker (1992)

Mark appearing in a Pitchfilm for The Price is Right (1972)[] 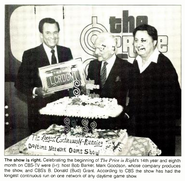 From Bob Barker's last show. After that, Mark Goodson Productions became FremantleMedia until 2018 now its Fremantle.

From Barker's tribute to Mark Goodson

Mark Goodson's shows have continued to dominate both the GSN and Buzzr lineups due to the fact that his company saved most of their shows while other shows by other companies were wiped to reuse the tapes.