The Price Is Right Wiki
Register
Don't have an account?
Sign In
Advertisement
in: Games, Quiet on the Set, Can't Go Over,
and 16 more

Four contestants are selected by the announcer (ex. Rich Fields), and proceed to Contestant's Row with loud cheers, high fives, and fanfare. A prize is showcased, and each contestant gives a bid on it.

The four contestants bid in order from left to right and must bid as close as they can to the actual retail price without going over. Contestants bid in dollars and not cents as the retail prices are rounded off to the nearest dollar and may not bid the same amount as any player bid previously for that prize.

The contestant who bids closest to the actual retail price without going over wins the prize and then gets to play a pricing game.

The contestant in the red podium begins the first One Bid. For subsequent rounds, a new audience member is then selected to fill the vacated seat on Contestant's Row and gives the first bid.

The order of the first four contestants called is NOT the same as the order they're positioned. The first contestant called will usually fill the red position first, or the green position. Thus, the order called can be left to right or right to left; on some occasions the contestants get mixed up as to which podium they use. However, as soon as the host enters the stage, the contestants cannot change positions for the duration of the show, and whatever position they're in during subsequent One Bids (unless they win their way up) is the one they keep.

If all four contestants overbid (the bids are higher than the prize's actual retail price), three (four prior to the late 1990s) buzzers sound, the lowest bid is announced and the bids are reset, and the process starts over lower than the announced lowest bid until one contestant gets a proper winning bid. If the second buzzer sounds that means another overbid this time the lowest bids once again all four contestant must be erased at later time. As of Season 50, almost all overbids are generally edited out of the show.

In the 1994 version, there was a variation of One Bid called "The Price WAS Right".

Early on, perfect bids weren't awarded a $100 bonus or any fanfare at all. The perfect bid bonus began in the latter half of Season 5 (April/May 1977). From then until around 1993, women who placed a perfect bid often kissed Bob on the cheek then were invited to reach into Bob Barker's jacket pocket, and they would pull out a $100 bill. If a man won the perfect bid, Bob Barker would shake his hand then hand him the cash. In 1993, when Dian Parkinson resigned on allegations of sexual harassment, Bob Barker changed the disbursement of prizes, simply handing out cash to contestants of both sexes once they got up on stage. This means of awarding the cash prize is continued today by Drew Carey; however due to ongoing COVID-19 pandemic, there is currently no physical handing out of cash (which the contestants wouldn't be able to keep anyway, as all cash prizes are paid out through checks).

This game, along with the Showcase, are the parts of the current version of The Price is Right that most resemble the gameplay on the original version, hosted by Bill Cullen.

In promoting Bob Barker's devotion to animal rights, occasionally a dog or cat would be brought out on stage by one of the Barker's Beauties during One Bid where Barker would promote the animal rescue shelter the pet was boarded at. Occasionally this would cause mild confusion as contestants sometimes thought they were there to win a pet, to which Barker humorously added before One Bid began, "And no, the dog is not part of the bid."

Sometimes, contestants will get up on stage right away as soon as they were called; Bob had a habit of playing along with the contestant and steering the conversation in a way to make them realize their error.

There are two very common strategies in this game. They are usually done by the contestant bidding last, but occasionally you see them by people bidding earlier in the round:

2. Bidding one dollar more than the highest bid: On the other hand, if you believe everyone else is too low, bid $1 more than the highest bid anyone else placed so that you will be closest to the actual price without risking going over yourself. However, this can backfire if the contestant you're doing this to correctly guesses the exact price and wins, so try to avoid him/her for the rest of the taping.

Every version of TPIR around the world uses the same format, with the only notable difference being cash bonuses for getting the price on the nose, while some, like Italy and Vietnam, do not award bonuses at all:

On October 9, 2017 (#8041K), during Dream Car Week, history was made when a car was offered for the first time, giving the show the first guaranteed car win outside of a pricing game or a showcase.

On April 1, 2022, as part of the episode's April Fool's Day theme, the usual course of things was reversed, and One Bid was played for a 2022 MItsubishi Mirage, worth $17,465. The contestant who won then played Cliffhangers for the "small" prize, a car dash cam worth $580. She lost.

An episode of The Flintstones called "Divided We Sail" from 1962 parodied One Bid from the original Cullen version, where Barney Rubble finds himself a contestant on a game show called The Prize is Priced. When it's Barney's turn to bid, he says "Well, uh, I'll just put in my two cents, and--" which results in his bid immediately being registered as $0.02 before he gets to place his actual bid. However, Barney wins because the other contestants overbid.

The highest bid in the entire game's history is $2,000,000. The producers were unable to put that on the screen due to them being 4-digit displays. The contestant in question was also rather infamous for making "interesting" bids the entire episode.

For more pictures, see One Bid/Gallery. 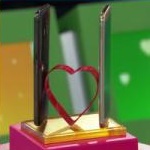 Yes, these phones were presented in the One Bid. Actual Retail Price: $1,298.

A 2018 Honda Fit LX offered as a one-bid prize during Dream Car Week.
Community content is available under CC-BY-SA unless otherwise noted.
Advertisement