The Price Is Right Wiki
Register
Don't have an account?
Sign In
Advertisement
in: Pricing Games, Active Games, Cash Award Games,
and 44 more

June 15, 2007 (#4035K)
Plinko is the most popular pricing game ever on The Price is Right. Debuting on January 3, 1983 and created by the late executive producer Frank Wayne, it is played for a cash prize of up to $50,000 and also awards prizes valued under $100. It is frequently said to be the most famous of all the pricing games. 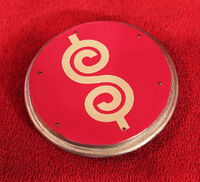 How the Game is played[]

Plinko has become an all-time favorite pricing game on The Price is Right, arguably the most popular of all pricing games portrayed on the show. Many carnival supplies and family game companies have manufactured Plinko boards of their own, with some selling for as much as $400. The Wall is an example of a game show that contains elements from Plinko, like slots that contain certain money values. However, the rules of that show differ greatly from the rules of Plinko and the cash prizes are much higher. Also, money can be dropped from the player's total. This is one of the few games in which the announcer gives the name of the game ("You're going to play Plinko..."). Two other games in which the name of the game is announced are Pay the Rent and ½ Off, but in every other game, even other games played for a cash prize, the announcer announces the prize, not the name of the game.

To date, several officially-released versions of Plinko have been made for home play; most as part of home versions of The Price is Right, and one as a stand-alone version of the pricing game. Endless Games produced the first two such home versions; the first was as part of their Second Edition Home Game of The Price is Right. This version used a deck of nine Plinko cards (2 cards each with $100, $500, $1,000, and 0 and one $10,000 card) instead of a Plinko board. For each "chip" earned, the deck was shuffled and spread out face down, with the player choosing a card and earning the value on the card. The second version was as one of the pricing games on both editions of their The Price is Right DVD Game. In both versions, the player "drops" chips from one of five possible positions on the top of the simulated Plinko board. The standard "$100-$500-$100-0-$10,000" layout is used in both cases. An electronic version of Price was released by Irwin Toy (aka "IT") in 2006. This self-contained console had a miniature Plinko board on its back, complete with miniature Plinko chips and a plastic cover over the pegboard to keep the chips on the board. Again, the standard value layout was used, for a top prize of $50,000. (This home version is also notable for having a miniature Showcase Showdown Wheel on the side of the console.) Plinko has also been a pricing game in many of the various video game versions of Price (both console and online), and several arcade and gambling game versions of Plinko have been produced. In 2020, Buffalo Games released a stand-alone version of Plinko for exclusive sale at US Target stores. This version contained a partially-assembled wooden and plastic Plinko board (with the standard prize layout) standing about 3 feet tall. It came with pre-installed plastic pegs attached and plastic "zig-zag" sides. (No front cover was included to hold the chips in on the peg section of the board, so chips COULD bounce off the board before landing in a prize slot.) Electronic sensors were located in each slot, and metal-and-plastic Plinko chips were included which would hit the sensor in a slot, lighting up the slot and playing either a fanfare (for the $100, $500 or $1000 slots), the "losing horns" (for the 0 slots) or the "winning bells" for the $10,000 slot). Like on the show, players could only drop one chip at a time, to activate the trademark chip-dropping sound. This version was meant to be played as a party game rather than a stand-alone in itself. Instead of playing the standard opening pricing game to earn chips, a deck of 50 double-sided cards depicting different pricing games was used. Some would have a single Plinko prize and price to guess, while others used altered versions of More or Less, Pick-A-Number (here called "A Digit Missing" for some reason), Now....or Then, Hi Lo and Vend-O-Price. These games were played by a single player to earn a Plinko chip. Still, others used a version of Contestant's Row, where all players made the usual One Bid to earn a chip. Yet others used a game called "Back in the Day" (essentially, a version of "The Price WAS Right" from The Price is Right (1994 – 1995, U.S. Version)), where players play a One Bid guessing the price of an older item from a specific time period (example: How much was a portable cassette player when they were first released in 1979? Answer: $150).

Appearances Outside of The Price is Right[]

In the Family Guy episode from May 13, 2007 (#5ACX12) called "It Takes a Village Idiot and I Married One" (which in turn was a parody of the 1995 book title by Hillary Clinton "It Takes a Village"), Cleveland Brown (formerly voiced by Mike Henry) briefly takes a ride inside a Plinko chip from Plinkoland but only to land on a zero. 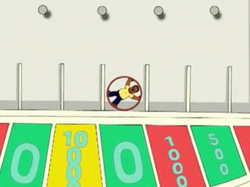 On an April 28, 2019 (#1887) episode of the CBS daytime talk show The Talk, a segment of Plinko hosted by Carrie Ann Inaba with Drew Carey as her co-host was played with a studio audience member if the chip was landed on the word prize instead of cash and it was played with only three small prizes instead of four which basically the studio audience member (or in this case "contestant") can manage to earn only up to four chips instead of five.

On The Price Is Right (UK game show), as well as O Preço Certo (The Right Price in Portugal) and the Netherlands versions, Plinko is played differently. Instead of playing for cash, they play for a bonus prize (usually a car in the UK, while the Netherlands and Portugal may offer cheaper prizes like trips). In 1995, the pricing portion was played like the CBS version. From 1996-2001, the player must guess which of the two prices was correct. On those shows, once all the chips are used, a model replaces the cash amounts with "Win/Lose/Win/Lose/Win/Lose," although contestants on the UK show had the choice of keeping the money and not going for this gamble. If "Win" is hit, the player keeps the cash and wins the prize. If "Lose" is hit, the player doesn't get the prize and loses the money. On the UK show's final season in 2001, there were also two spaces with pound (£) signs. If either one of those was hit, the player didn't win the prize, but they won double the money they had already earned. In the UK, to earn discs, the player had to determine which of two prices was correct for one particular item, similar to Double Prices. He/she could add up to three more in addition to the one disc given at the start. In the early days of The Price Is Right (UK game show), the American method of pricing was used. In Portugal, the player has to determine if the price of the given product is true or false and he or she can earn up to four discs. Three different slot sequences were used:

For a total of £600. Aside from this difference, its rules are the same as those from the first six series of Bruce's Price Is Right. There has also been one case where a chip got stuck-- and it still counted after being dislodged (on this version, there was no Plinko Stick; Joe simply shakes the board). The game had an Asian theme, although no rationale has been determined for this design choice. In the December 2017 episode, the slots consisted of two "0" slots, two £500 slots and each of the five remaining slots representing a different prize, each of which could only be won once. Finally, in the Epic Gameshow, this Plinko board was used:

The game offered no cash and was instead played for three prizes. The contestant was given one chip and could earn up to three more by winning small prizes. The board had seven slots, numbered 3-2-0-1-0-2-3. Hitting a 3 with a chip meant the contestant won the least expensive prize, 2 meant he won the middle-priced prize and 1 meant he won the most expensive prize. Landing in 0, of course, won nothing with that chip. Still, other countries' versions of the show, including Mexico's Atínale al Precio, Italy's OK, Il Prezzo è Giusto!, France's Le Juste Prix and Vietnam's Hãy Chọn Giá Đúng, have done their best to emulate the American format of Plinko, with differences in the cash prizes offered to be the only significant changes.

Towards the end of the run, the ₤0 & ₤1M spaces were swapped, producing this board and also, a chance to win a car. If the player earned ₤2M, they could surrender the money to open the ₤1M space, revealing either the word "AUTO" or a space that loses all earned.

When the version revived in 2020, the game is played for four motorcycles or up to Rp. 12,000,000 in cash. Also, contestants can now only add up to three more chips, for a total of four. Landing in the middle slot (which is indicated by a star) win the contestant a motorcycle on his/her own choice. The Plinko board now has the following slot sequence:

France's original version (Le Fakir) had this board:

When this game was introduced in 2004 as Zíc Zắc (ZigZag), it had this board:

For a top prize of VND10,000,000 (around $500). As this version of Plinko is impossible to walk away from the game empty-handed, the game was taken out of the rotation (probably due to a new set is being built) around 2010 and wasn't revived until at least April 2011. The Zíc Zắc (ZigZag) game was revived in 2011 with a board that resembled that of America's 1983-1998 board value layout and was played for VND25,000,000. From 2011-2016, the Plinko chips are called "the golden soybeans", because of the game being sponsored by Vinasoy, a soymilk company in Vietnam. Although Vinasoy now no longer sponsors the show, the game is still in rotation. As of Tuấn Tú-Hoàng Linh era, the game's top prize is the biggest of any game in the lineup.

In 2017, the UK did a Christmas revival which involved Plinko. The same rules applied but the revolving prize displays were not present and neither was the US Plinko board; instead, the UK had their board.

9 Secrets Of The Price is Right's Plinko