Rosie Tenison (born December 2, 1968 in Caldwell, Idaho) is an African-American Model and Actress. She previously auditioned to become one of two newest Barker's Beauties on The Price is Right during it's 29th season.

Native of Caldwell, Idaho. Rosie comes from a big family, she has three older brothers and an identical twin sister, Renee. Both Rosie and Renee both are working models and as far as Renee's modeling credentials go, she was one of very few African-American women to have posed nude in Playboy as she first appeared in the November 1989 issue of the magazine and the following year, she made history by becoming the very first African-American to be named Playmate of the Year for 1990.

Rosie, on the other hand, was never a playmate but she did posed together with Renee in the August 2002 issue of the popular men's magazine.

As a working actress, Rosie has appeared in various guest starring roles on various television shows which include Martin, Married With Children (alongside twin sister, Renee) , Malcolm & Eddie, and had a main character role on the TV series L.A. Heat, which was an action-packed Los Angeles detective program. After L.A. Heat ended, Rosie moved on to land other TV gigs as well as continuing to land modeling gigs.

In early 2001, after a long string of TV and modeling gigs, Rosie wanted to take on a new challenge. She learned that the television Game Show The Price is Right, during it's 29th season on the air, was on the hunt to find two new Barker's Beauties to permanently replace longtime models Kathleen Bradley and Janice Pennington, both of whom (along with several of the show's staff members) were abruptly and unjustifiably dismissed from the series as their final appearances aired on December 13, 2000.

Rosie decided to audition and after meeting with the show's producers, she was granted an on-camera audition as she made her tryout debut on (airdate) January 12th and continuing on until the 26th and returning just a few short days later beginning on 30th until February 2nd (with Claudia Jordan returning the following Monday & remaining until the end of the season) and all total: 15 shows.

Perhaps during her meeting with the producers, Rosie possibly mentioned that her twin sister, Renee had previously auditioned to be (the first PERMANENT African-American) a Barker's Beauty on The Price is Right back in 1990.

Today, Rosie occasionally still does modeling in catalogs and magazines alongside her twin sister, Renee as well as continuing to appear in television and movies. 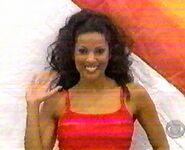 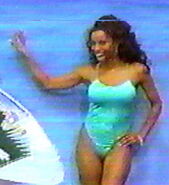 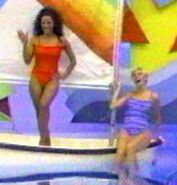 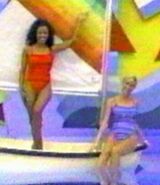 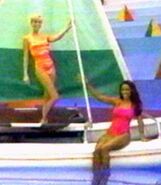 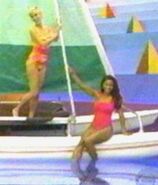 With Nikki Ziering
Add a photo to this gallery

Add a photo to this gallery
Retrieved from "https://priceisright.fandom.com/wiki/Rosie_Tenison?oldid=132973"
Community content is available under CC-BY-SA unless otherwise noted.