The Price Is Right Live!

The Price Is Right LIVE! is a staged production show based on the television game show The Price is Right.

The live stage shows are held at Harrah's Entertainment casinos, as well as the Foxwoods Resort & Casino in Connecticut and the Seminole Casino Coconut Creek in Coconut Creek, Florida. The show also briefly ran at two Atlantic City casinos in 2005, 2006, and 2011. They are produced in association with FremantleMedia.

Only a small selection of the show's pricing games have been replicated for the live show: 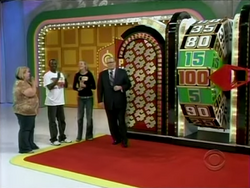 Announcers for the show include Randy West (who was the regular Las Vegas announcer for several years), Daniel Rosen, David Ruprecht, JD Roberto, and others. West has also been a substitute announcer for selected episodes of the CBS version in both daytime and primetime, and both he and Rosen were announcer search contestants in 2003–2004.