< The Price is Right
Edit

May 23, 2016 (#034SP)
The Price is Right/Survivor was a prime-time special that was a crossover of Price and the popular reality TV show Survivor.

For this special, host Jeff Probst made a guest star appearance on the show along with nine former castaways from past seasons of Survivor including:

Each chosen audience member plays alongside a castaway. The contestants played for cash and prizes as usual while their partners played for charity (or charities) of the castaway's choice(s); Each contestant's winnings were matched, totaled and donated in cash to a charity. Instead of Probst saying: "The tribe has spoken", when contestants were eliminated in the showcase showdown, the phrase: "The wheel has spoken" was used. Naturally, each contestant had a torch similar to that of the show, and when eliminated their torch was snuffed out in a similar fashion to the show.

Appearances Outside of The Price is Right[]

In the Family Guy episode "Screwed the Pooch" from 2001, Peter Griffin becomes a contestant on Survivor but he accidentally trips on half of the set and revealing the set as being of The Price is Right (Barker) since both of them aired on CBS. 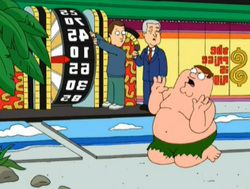