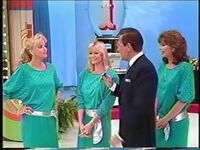 The Price is Right Models (also formerly known as "Barker's Beauties") are the lovely ladies of the show. They are the ones showing off the prizes offered and demonstrating them too. They've been the most vital part of the show ever since its 1956 debut & 1972 return and are still part of the show today. Models have come & gone over the years but they still give sex appeal to appliances.

ADDITIONAL NOTES: During the tenure of Bob Barker, the ladies were known as "Barker's Beauties". When Drew Carey took over as host, he opted not to give them a collective name, instead he chose to refer them as "models" or by their first names, so as to help them further their careers.

Here a list of all the models that have been on the show:

On the 30th Anniversary Special from Las Vegas (airdate: January 31, 2002), Host Bob Barker was introduced in the opening credits with the fabulous Rio showgirls standing on the opposite sides of the door, gesturing as it opened, revealing Barker as he makes his way towards the incredibly large audience.

Some of the celebrities have appeared as models on some episode of Price (i.e. Tyra Banks).

Some of the ex-Barker's Beauties went on to appear as one of the 26 beautiful briefcase models on the primetime NBC game show Deal or No Deal hosted by Howie Mandel that was based on the Dutch format called "Miljoenenjacht/Hunt for Millions" (i.e. Claudia Jordan, Lanisha Cole, Lisa Gleave, Sonia Vera, Kristal Marshall, Enya Flack and Mylinda Tov respectively), which ran from December 2005-May 2009.

Appearances Outside of The Price is RightEdit

Retrieved from "https://priceisright.fandom.com/wiki/The_Price_is_Right_Models?oldid=95284"
Community content is available under CC-BY-SA unless otherwise noted.